When the current success singer and dancer PSY and his South Korean fellow citizen UN Secretary-General, Ban Ki-moon, appear in front of an unusal high number of journalists at UN headquarters in NYC this is likely intended to benefit both parties. The UN Secretary-General and his organisation aspiring to attain greater recognition amongst ‘Gangnam Stylish’ youth and dancers around the world (close to 600 million clicks for the video so far). Just like seemingly much impressed PSY in his newly acquired role as a representative of his country and his pursuit of the Billboard throne.

The shared nationality of both Ban and PSY may have been an incentive to arrange for the meeting. Incentives for such decisions are very often straight forward. Ban had also repeatedly stated his strong belief in music as a vehicle for tolerance, reconciliation and change in the world before the encounter. Change maybe from Steve Urkel or the Prince of Belair to PSY as the world’s dancing inspiration. Who could possibly have omitted inviting them to UN back then? Just make sure to be inspired by Ban’s, PSY’s and Ai Weiwei’s dancing attempts. For whatever reason. Too much inspiration from Ban’s next guest that day is not recommended: Felix Baumgartner. 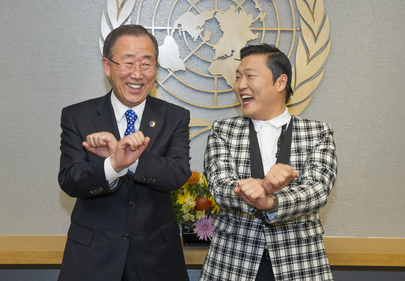